SON OF THE FAMOUS GUIDAM 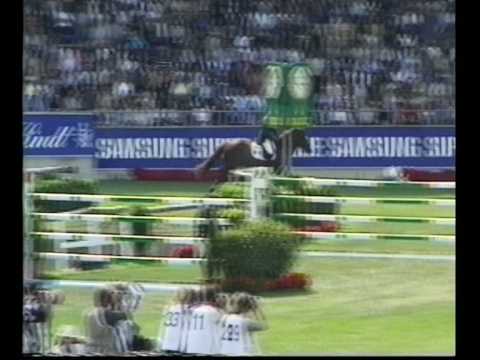 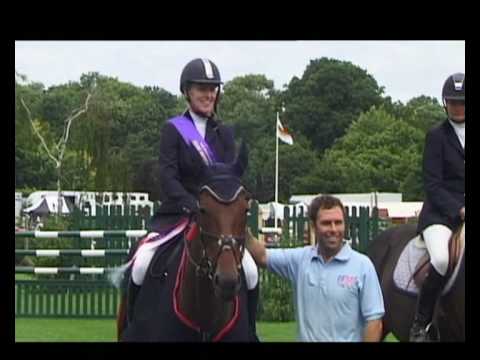 ❝  Who doesn’t miss Guidam, leading showjumping sire in 2003/2004 ?So don’t wait for using his best son : Luidam, placed since several years among the best Sires in the World Rankings ! ❞

He is a son of Quidam de Revel (Jalisco B) who acquired world fame in 1992 by his performance in the Barcelona Olympics (ridden by Hervé Godignon, where he won team bronze and Individual forth place) and proved to be a world famous sire. Guidam has also a very dam line with a lot of thoroughbred blood.

He was a good international winner with Eric Van Der Vleuten. We’ll remember mainly his title for the ‘Best Stallion’ at the Zwolle International Stallion Show. In 1995 : 2nd of the stallion class of Amsterdam CSI, 1st of Mechelen CSIO Puissance, 1st of the Top Score of Zuidlaren CSI. In 1996 : 2nd of Goes CSI GP, 3rd of Hasselt CSI GP, 13th of Saint Gall CSIO GP, etc.

With an amazing progeny, Guidam is now acknowledged as being one of the 10 best stallions in the World ! He had the KWPN « Keur » distinction and has been in 2003/2004 the leading sire among the best sires of CSO winners with the rare 17 mark.

Just after his death, his offspring payed tribute to him with 3 great medals at Beijing Olympic Games 2008 : Ninja La Silla, silver medal with Rolf Goran Bengston and Authentic, individual bronze medal and team gold medal with Beezie Madden ! Authentic has also won Aachen 2007 GP, one year after winning an individual silver medal at the World Equestrian Games. Authentic was voted « Horse of the Year 2004 » in USA and also won a team silver medal at Athens Olympic Games.

He is also the sire of the stallions : Guidarc, Guiminko, Le Bon, Luidam, Madison, Markies, Ulinus (winner of the « Futur stallion  » class in Zwolle in 2006), Uvolinus, etc.

HIS 1st DAM : ELJENOVHE: is a "Pref Elite" mare in the KWPN Stud Book

She has also produced Joline, mother of Orsini, international eventing winner. She is also the 2nd dam of Scandic, stallion, great international dressage winner, 20th of the 2009 World ranking list.

Her sire Akteur sired the international show jumping full brothers Tepic La Silla winner of a bronze medal at the 2003 European championships and Shurlands Governor, whilst through Lucky Boy xx she is closely related to such top performers as The Freak, Titan and Brown Boy who were all top level show jumping horses. 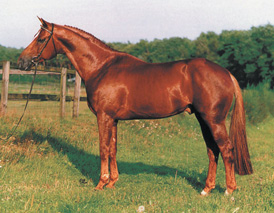 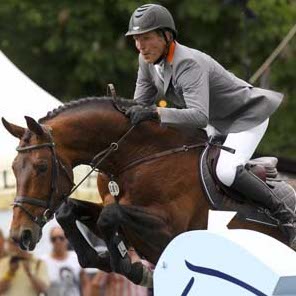 Luidam’s showjumping career began in a very good manner with a 7th place at the 5YO World Championships in Lanaken and then at 6 YO when he won the Foxhunter Finals in Wembley in 1999 with John Popeley.  In 2002 he was purchased by Sue Davis (his present owner) where he went on to win over £100,000 Sterling, in his first year as a nine year old, jumping with Billy Twomey. With such International success he was selected for the Athens Olympic Team in 2004. He jumped an impressive double clear in the Aga Khan’s Nations Cup in the Dublin Horse Show to win for Ireland in 2004. Pulling a shoe while jumping the combination in the Dublin Grand Prix caused a crack in his hoof wall which unfortunately left him out of that Olympic trip.

With Billy Twomey, Luidam made one of the most successful couple in Europe, representing Ireland many times.

Luidam is placed 40th best sire at the 2020 WBFSH rankings !

According to Michael Whitaker, Luidam is « one of the most exciting and promising new stallions to breeding programmes in many years !«

THE BEST PRODUCTS FROM LUIDAM

Luidam shows an easy temperament, a nice shape with a long neck and strong legs. He is athletic, moves well and has proved his excellent potential at international level. It is also an interesting stallion through his great bloodline, and especially his sire Guidam but also the several thoroughbreds that we find back in his pedigree, which becomes rare nowadays.

Luidam brings to his offspring his blood, his scope and his good mind. We recommend him mares with enough size.

You can bring your mare to France for being inseminated.

The semen of Luidam is marketed for sale of straws, at the price of 750 € HT/ dose

1 dose = 1 straw to use in deep insemination on ovulation. Without guarantee alive foal.

It is also possible to send fresh or frozen semen to another french AI center (shipping costs to add).

Luidam has got a very good fertility rate.